A letter from Brussels: how to make it real in Europe's regions and cities 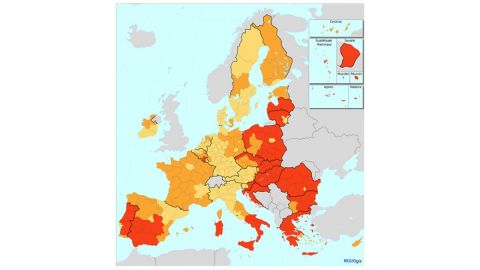 There sat four people. It was the second workshop, Cohesion Policy 2021-2021 and NextGenerationEU: making it real in Europe’s regions and cities.

Two were members of the Committee of the Regions, the EU’s advisory committee on regional policy comprised of municipal and regional politicians: a Frisian alderman, Rob Jonkman, and Isabelle Boudineau, vice-president of Nouvelle-Aquitaine. There sat also two eurocrats: high-ranking communications officer Christopher Jones, chairing the meeting, and Moray Gillard, Head of Policy Development and Economic Analysis Unit of the European Commission’s department for Regional and Urban Policy.

In his introduction, Mr. Gillard stated that the Cohesion policy currently had three aims.

1. To help member states with their recoveries from the pandemic.

3. To ease the green and digital transformations of Europe.

These aims are sensible, and precipitately, laudable. Afterward spoke Alderman Jonkman. He spoke concretely of how the EU gave money for important things in his region. The most impressive example was Lapvas Imaging. Based in Leeuwarden in Friesland, it is developing a system that visualizes the profusion of blood throughout the colon. This enables surgeons to better discern where there is less blood and so where to make incisions and administer drugs, making operations easier and ensuring that they do not have to resort to trial-and-error.

That morning, I had visited IGRETEC (Intercommunale pour la gestion et la réalisation d’études techniques et économiques), a technology park in Charleroi. IGRETEC accommodates more than a score of companies, European and foreign, and has, aside from offices, living quarters and at least one good laboratory.

Bone Therapeutics, a company seeking to use specialized stem cells to heal fractures and breaks in patients, uses the laboratory’s radioactive dyeing to track bone growth in animals for preclinical trials. Its business developer, Ching Man Choi, told me that such facilities were few. Having one made Belgium a sensible place to set up shop.

We saw one example after another of good projects the EU funds and how much it funds them this week. They range from the avant-garde like colon visualization and bone regeneration to, as we were informed in yet another workshop, giving Internet to the northern Greek town of Zagorni—whose very name implies remoteness.

Yet if the aim is real cohesion, seriously flattening disparities across Europe, such discrete projects, no matter how well funded or how good, are not enough.

This is not because of a lack of professional capacity. After meeting Guus Mujzers, a programme manager for cross-border cooperation at the Commission who struck me as an intelligent man, I was told by an older journalist who reports regularly from Brussels that Mr. Mujzers and his ten-person team ran a programme of billions.

The problem is, seemingly, the lack of a grand, strategic vision. Maybe such a plan exists but I saw no sign of it. When I inquired about interregional coordination, Mr. Junkman told me of an instance Dutch and German provinces cooperated on a project. I was also told about two towns, the Franco-Spanish border betwixt, that built one hospital in common instead of two separate ones. Madame Bourdineau also spoke of the échanges d’expériences in the Committee, which benefited its members. This is all well and good but, again, not enough.

One reason why such a plan is absent is lack of competency; Brussels cannot single-handedly redistribute wealth or tell Europeans what and where to set up shop—some might call it the cause. Nevertheless, this is not much of an excuse.

One need not necessarily be able to execute a plan to make it—or prompt discussion. The EU is as much a forum for coordination as it is for regulation and coordinating economic and development is why the Common Market was established. Moreover, the Commission is already charged with making recommendations to the Committee. If its members all hatched a plan and set about implementing it in their own regions, there is little that could stop them.

They would not be EU agents but local politicians and in the clear insofar as they did not contravene national legislation—and initiatives for economic development are clearly in local government’s purview. Even if national governments opposed them, with the Commission on board, the plans can just be proposed as legislation to Parliament and upon passing, remove whatever obstacle normal national law presents. And governments could hardly accuse Brussels of imposing legislation from on high when that legislation was generated at the smallest level by those politicians closest to the people.

Even if the Committee refused the recommendations or could not reach a consensus, at least we would get some real discussion on cohesion. Even without the Committee, a bill in parliament could start a conversation. Although the best way to do that seems to be the Committee laying out a big map and thinking hard about what to do with Europe just as the city planners might do when deciding on zoning regulations. The point is that we discuss what to really do to substantially smoothen the disparities in Europe. The Commission is an adjunct.

The Committee is also viewed too much as a place to just get funding. Much was made of funding structure and municipal leaders reminded us that we should not forget faraway places or small islands. The importance of big cities was stressed too.

At its worst, the Committee seems to be a place for people to lobby for as much funding as they can get, and, at its best, as Madame Bourdineau and Mr. Jonkman talked about, where regional leaders can make common projects happen and share experiences. Nevertheless, meaningful cohesion seems unlikely to happen solely by inter-municipal story sharing or cooperation on this and that project. A grander vision and more focus on organizing rather than just funding are needed. Cohesion strategy needs to cohere.

We also need more communication. Youth4Regions’s existence attests that the EU understands this. Yet too much goes into telling people about this project in Upper Masuria and that project on the Duoro.

The EU rightly advertises its projects. Doing so proves to its citizens that it does important things—although huge amounts of funding for faraway projects may prompt one to wonder whether all that money is well spent. How much goes to teachers and school computers and how much to lawyers or frivolous orders of yellow cardboard paper?

One might engage better by telling people more about how they can get funding for their own projects. Some details might well be on municipal websites already but since per the current system, one needs to apply for funding to get it, one should really hammer in the different funding opportunities widely and closely guide would-be project managers through applications. The aim, after all, is to maximize the number of applications, thus maximizing the number of projects, and thereby develop and improve Europe, not merely furnish people with little-known opportunities in that direction.

Secondly, though involving the private sector in cohesion was one of Mr. Gillard’s stated aims, the EU seems understandably wary of becoming too intimate with the private sector. I have not come across an example of the EU offering a business development grant—not COVID or employment support. It may offer cheap loans—Bone Therapeutics got an EU loan just about a year ago—but they do not seem ubiquitous either.

A clear way to develop a place is to get private investment. Why not cooperate with local chambers of commerce? Why not invite, in great numbers, alongside journalists and politicians, businessmen and investors to the European Week of Regions and Cities and tell them all about the astounding fertility of the Danube Delta?