Me
Login to Europass

Have time for a quick survey?

We want to provide you with the best experience, so your feedback is very valuable to us. All you need to do is answer 5 simple questions

ELM v.3 is an exciting new development in the field of educational data exchange, opening new possibilities for interoperability and credential exchange.

What is the ELM?

The ELM is a data model that aims to establish a single semantic vocabulary for learning in Europe. By unifying technical vocabularies, it allows for seamless data interchange across borders for multiple scenarios including:

The ELM is made up of four levels:

While previous versions of the ELM were mainly aimed for the use of the European Commission and Member states, the new model is targeted for all education and employment stakeholders in Europe.

The new Ontology provides a standardised vocabulary for the whole united model, while in previous versions each application profile was effectively a different model. The application profiles used approximately the same classes and properties; however these were not formally related, and changes to one model were rarely replicated in other models, leading to multiple inconsistencies between models. With the new model, any change is reflected across all application profiles

The Ontology is made up of relations between concepts, meaning that we now know for instance that a learning outcome in a learning opportunity is the same thing as a learning outcome in a qualification. This allows the creation of knowledge graphs to explain relationships between data, which will be extremely useful in enhancing and strengthening AI models. These can be used to power skills assessment tools, learning pathway suggestions, job recommendations and other kinds of automated guidance systems for European citizens.

Each concept is defined in the ELM namespace, allowing anyone building any application or data model to reuse this concept.

The benefits of ELM v3:

When will ELM be released?

ELM v3 and its applications will be released progressively in the first half of 2023.  An early preview of the ELM v3 is accessible on Github.

Documentation on the model will be released at the end of 2022, while the Europass infrastructure will be converted to use ELM v3 from the second quarter of 2023.

How can we use the ELM? 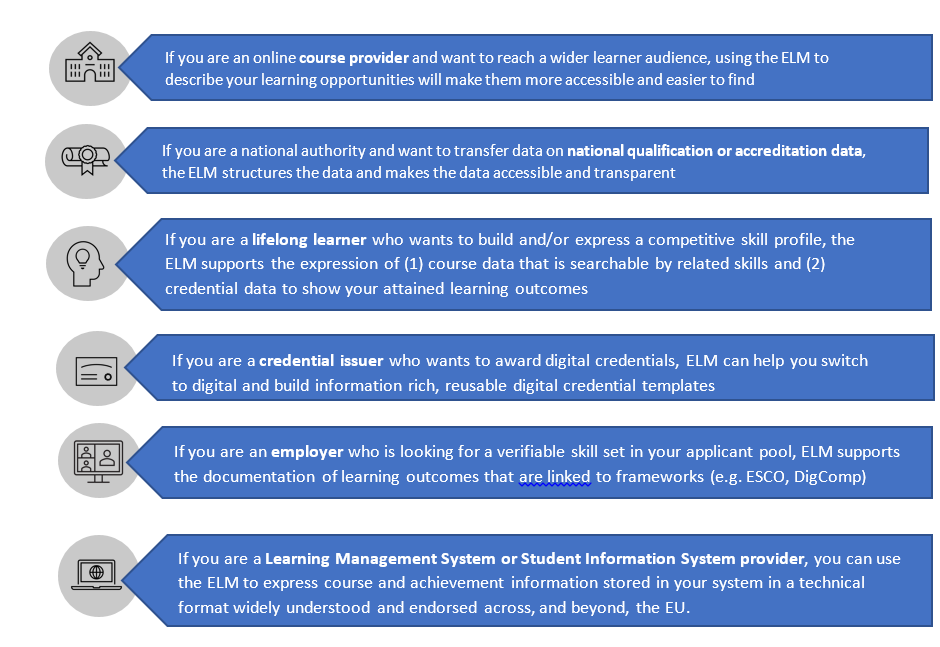