Over 200 NGOs from across the globe request the UN to establish a World Citizens’ Initiative and give people a direct voice in its affairs.

A United Nations World Citizens' Initiative (UNWCI), where citizens could collect signatures and propose them to the grand international organisation of the UN sounds like a unique idea, however it really isn’t. The European Citizens’ Initiative has existed since 2012 and was established for many of the same reasons civil society organisations are pushing for a UNWCI: the democratic deficit. Over 200 NGOs have already joined the campaign for a UNWCI and are directly inspired by the existence of the European Citizens’ Initiative. 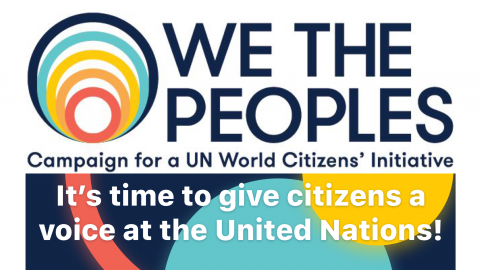 If you were to ask someone on the street what they think their individual influence in the global arena of the United Nations is, you are likely to hear that they believe they have no influence. And they are not entirely wrong. The UN is a complex, international body that reigns way above the influence of the average citizen. Single active citizens making headlines like climate activist Greta Thunberg have made appearances before UN conferences, and the institution has since long made more of an effort to give civil society a voice. But the average citizen without a large platform or without NGO representation has little to no opportunity to propose ideas to the UN, let alone shape its agenda. This might sound like déjà vu to Europeans. In fact, the idea for a World Citizens’ Initiative is not incredibly novel. It is inspired from a transnational tool that has already existed since 2012: the European Citizens’ Initiative.

The European Union was similarly criticized for being a club of political elites rather than a union of and for the citizens. It was because of these criticisms that civil society activists who recognized the EU’s democratic potential lobbied for the inclusion of an instrument that would allow citizens to collect signatures on an issue they see important in Europe, and after enough support, present it to the EU institutions - thereby, influencing the agenda of the EU from the bottom-up rather than the traditional top-down political mechanisms. It was the perseverance of these civil society actors and direct democracy activists, the very founding members of Democracy International, which successfully campaigned for the European Citizens’ Initiative’s dawn into the Lisbon Treaty that makes up the governing rules of the EU today. Today, joining a European Citizens’ Initiative is a right of all EU citizens that allows 1 million citizens to propose legislation to the European institutions and has allowed citizens and civil society to share knowledge in initiative campaigning. The tool has also fostered EU citizenship and a community of active Europeans, particularly youth, and has raised awareness on a variety of issues important to the public.

The UN is similar to the EU in many ways. And both entities can benefit from more citizens’ participation in decision-making, more crowdfunding possibilities, and more diverse voices and suggestions to highly complex and global problems. The EU has taken steps to close this democratic gap and bring citizens closer to decision-making, and it’s high time that its bigger, older brother, the UN, takes steps in the same direction. With global issues such as climate change, poverty, health crises, famine, and natural disasters requiring global solutions, the UN can take inspiration from the EU in opening up the discussion floor to citizens.

If the UN is the international body for fostering worldwide cooperation and proposing solutions for complex global problems for the betterment of humanity, why aren’t the world’s inhabitants, the global citizens, involved in proposing those solutions? Why is it that a handful of global high-level individuals decide the solutions to the very issues they won’t particularly experience or suffer from, but average citizens will? 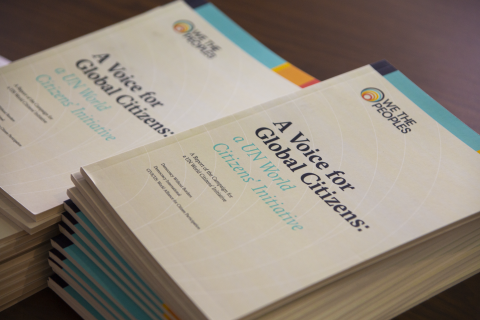 The UN suffers from a democratic deficit: its bodies and their decision-making procedures neglect people’s participation, and there are no means for ordinary citizens to influence its decisions. However, democracy is a core value of the UN, and it strives to work on behalf of the lives of everyday people across all levels. If it wants to uphold this value, then it must open its complex decision-making procedures to hear the voice of those everyday citizens who understand and experience the global problems on the ground. It must be open to crowdsourcing solutions to international problems. Taking the European Citizens’ Initiative as the world’s first transnational tool of participatory democracy as inspiration and as a model, a global offspring called a World Citizens’ Initiative can find global solutions to the global problems we have.

And if you think that a Word Citizens’ Initiative is too much of a pie-in-the-sky idea - we should not forget that it was exactly the efforts of civil society that put the pie in the sky of 500 million Europeans just eight years ago. It is civil society organisations who are doing the same work on the international scale today. Democracy Without Borders, Democracy International and CIVICUS have already set the groundwork, now civil society organisations are invited to follow in the European Citizens’ Initiative’s footprints and make the idea a reality.

Daniela Vancic is the European Programme Manager at Democracy International, an NGO that promotes stronger citizens’ participation in political decision making, with experience in the European Citizens’ Initiative since the tool’s inception. Daniela has four years of campaign- and network-building experience, and for the last three years, she has been carrying out the European campaigns of Democracy International. Daniela has worked extensively on the European Citizens’ Initiative, from offering campaigning and fundraising advice to organisers, to advocating for stronger implementation of the tool’s regulation, and making the tool more well-known to citizens.

Get in touch with Daniela on the European Citizens’ Initiative Forum !