With European law-makers poised to propose a historical new law to regulate artificial intelligence (AI) later this month, the need for EU citizens to engage with the impacts of emerging technologies on society is more urgent than ever, and our European citizens’ initiative offers just that. It can be hard for people to know how their views can make a difference upon seemingly far-away decision-making processes. Currently, biometric technologies like facial recognition are being used across Europe in ways that can undermine democracy and infringe on people’s freedoms. In response, the initiative ‘Civil society initiative to ban biometric mass surveillance practices’ is harnessing the power of large-scale citizen action to call for real legislative change. 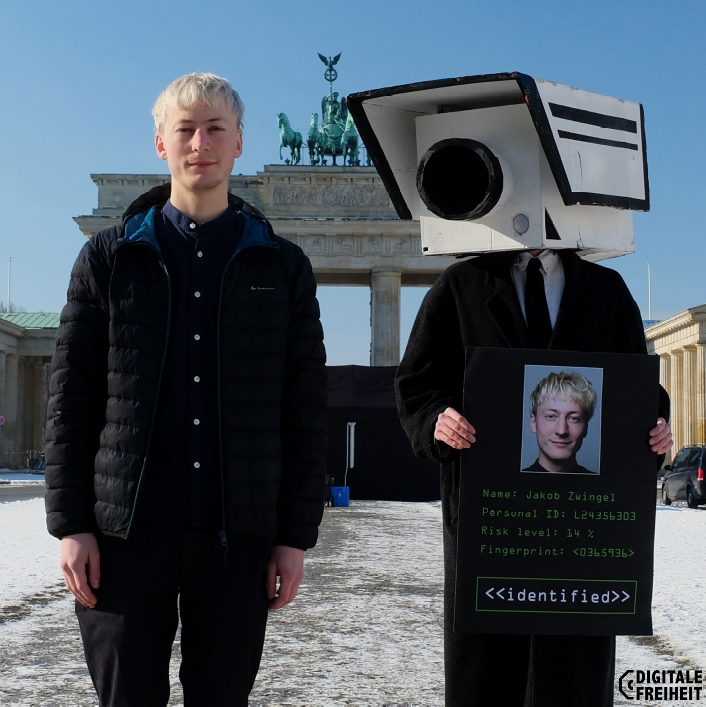 A survey run by the European Parliament and the European Commission at the end of 2020 found that “the very vast majority of Europeans (92%) across all Member States demand that citizens’ voices are ‘taken more into account in decisions relating to the future of Europe’.” Democracy – the will of the people – is one of the pillars on which the EU rests. The idea that together, the countries of Europe are stronger, and that we can work together for peace, stability, prosperity and freedom, cut to the very core of the EU’s existence. From the outside, the EU’s processes can seem intimidating – it is not easy to find agreement across political, cultural and geographical boundaries, which is why it is so important that the EU engages people to ensure that the decisions that affect our lives are fair, legitimate and inclusive.

This April, an upcoming proposal by the European Commission for an EU-wide law on artificial intelligence will set in motion a multi-year process of deliberation by EU law-makers (including Members of the European Parliament (MEPs) and representatives from each EU Member State). The EU is likely to make history as the first region in the world to comprehensively regulate AI technologies. Yet while the European Commission said last year that they want a “broad public debate” on the use of these AI technologies in our society, the reality is that many groups have been absent from the discussions, and knowledge about what AI is and how it can impact our societies is low. In particular, we see that racialised people in Europe are the most likely to be subject to AI decisions and various forms of surveillance, but the least likely to have a say in decisions about the laws governing AI development and use.

This is where the pan-European ‘Reclaim Your Face’ campaign to ban biometric mass surveillance practices enters the debate. While experts don’t always agree on the definition of ‘artificial intelligence’, the European Commissions has said that biometric technologies like facial recognition will be included in the scope of the upcoming AI law, which aims to set rules for a wide range of tools and technologies that generally perform statistical analysis of data by algorithms to make decisions or predictions.

European Digital Rights (EDRi), a network of 44 digital rights organisations, have been mobilising over recent years as - across Europe - governments and corporations have increasingly adopted biometric mass surveillance technologies. Biometric technologies are those which process data about your body, your behaviour, or other sensitive identifying characteristics. In response to the growing use of people’s biometric data in everyday life for surveillance in potentially very harmful ways, EDRi, together with 11 other digital rights organisations, launched ‘Reclaim Your Face’. The coalition has so far expanded to 58 groups, including a Trade Union, anti-discrimination groups and human rights initiatives working at national, European and international levels.

In particular, Reclaim Your Face (RYF) are campaigning against the specific use of biometric technologies in public spaces which unfairly single people out and which treat everyone as suspects just for going about their daily lives. These are forms of mass surveillance, and legal analysis has shown that they are not compatible with the EU’s rules on human rights. Examples include the use of facial recognition drones used against protesters; the use of pseudo-scientific aggression detection devices on streets; or the identification of shoppers based on their gait (the way that they walk).

The Reclaim Your Face coalition are concerned about such uses of AI technology because, as EDRi recently argued, they create the perfect infrastructures for unlawful mass surveillance by states and corporations, using each person’s unique identity against them. In the example of using biometric surveillance drones against protesters, police forces can intimidate people and disincentivise them from raising their voices against injustice or corruption, for fear of repercussions or being labelled a ‘troublemaker’.

In the example of aggression detection, local authorities have used pseudo-scientific, experimental technologies to intervene when someone is supposedly being aggressive, despite the fact that people of colour are consistently and inaccurately interpreted by algorithms as more aggressive than white people. Or in the supermarket example, each purchase and interaction can be tracked, added together, logged on a secretive file about each individual and – if a security guard doesn’t like how a person looks – potentially even used to ban them from other local shops.

In all of these examples, people lose their anonymity in public spaces. This right to keep ourselves private and to not be tracked across time and place is critical for democracy. It protects whistleblowers and journalistic sources that ensure a free European press that can hold power to account. It allows us to live our authentic lives with confidence – such as publicly expressing our religion, our sexuality or our gender identity – without the threat that it will be used against us. It enables us to benefit from the presumption of innocence, and to only be subjected to surveillance if there is a justifiable reason for it. A healthy society is one where we are free and can function autonomously. It is vital for our democracy that we uphold such freedoms.

The ECI by Reclaim Your Face, ‘Civil society initiative for a ban on biometric mass surveillance practices’ is designed to ensure that the will of the people is represented in the AI legislative process, in particular when it comes to things like biometric mass surveillance practices that can have such an enormous impact on democracy and people’s lives. We want the chance to stop the most harmful uses of technology before – without most people even realising – they are suddenly everywhere.

With Euroscepticism receiving misguided validation from the UK’s exit from the EU, it is more important than ever that Europeans feel confident in the European project. One of the key ways that this will happen is through knowing that our voices are listened to and taken seriously – and that our democracy works for everyone, not just those with power. This means continuing to invest in and expand awareness of direct democratic processes like ECIs, especially with communities that have historically been excluded from EU decision-making processes. Critically, it also means stopping practices like biometric mass surveillance, which can pose an existential threat to our ability to protest, to express ourselves or to seek information. The fight to ban biometric mass surveillance practices is ultimately a fight to preserve the EU as a beacon of democracy.

Disclaimer: The opinions expressed on the ECI Forum reflect solely the point of view of their authors and can in no way be taken to reflect the position of the European Commission or of the European Union.

Ella is a policy and campaigns officer at the digital rights network European Digital Rights (EDRi). Previously she worked for an engineering and technology company and then spent time researching the intersection of human rights, technology and society from a feminist sociological perspective. A UK native, Ella now lives in Brussels where she advocates for the protection of people’s digital rights in the EU.

Connect with her on the Forum!